The trend of the last few months has been broken; the S&P 500 outperformed both the developed and emerging markets as a whole.  As it is with most short time spans, much of the relative performance of international equity markets can be attributed to the relative changes in the values of currencies.  It sounds strange that currencies would have an effect, but think of it in terms of a single stock.

Shares of the Japanese company Sony trade in Japan, priced in yen (it also trades in the United States, priced in dollars, but that is an aside not relevant to this example.) Those shares represent a partial ownership in a company that is headquartered in Japan and is priced in yen.  Suppose that hypothetically on a particular day Sony shares did not change price.  Also assume that the value of the Japanese currency, the yen, increased that day.  For a Japanese investor who owned a particular number of Sony shares nothing would have changed.  But if an American investor sold those shares and converted the resulting yen into dollars, more dollars would be received had it been done at the end of the day (after the yen had appreciated) than if done at the beginning of the day.  So even though the market price of Sony did not change, the value to an American investor did change simply because the value of the yen increased, allowing the American investor to receive more dollars.

It is important to note that the only currency that directly impacts the value of Sony in this example is the yen, because Sony is a Japanese company.  So it is hard to make broad generalizations about currency effects on an international equity index such as the MSCI EAFE without knowing the weighted effect of the currencies of each individual stock in the index.  One item that does give us some insight is the U.S. Dollar Index, which tracks the value of the dollar against a basket of six major currencies.  The weighting of the currencies in the index is based on the amount of trade that the U.S. does with the countries that use those currencies.  The following is a graph of the index this year. 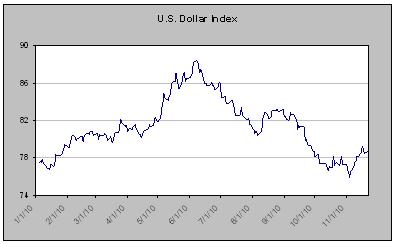 Having said all that, the following is a table of the top and bottom five country funds for the period of October 14, 2010 to November 15, 2010 and the performance of their currencies relative to the dollar during that same period.

A few items of note from this performance:

The main event that appears to have reversed the dollar’s fortune is not that the dollar has become so attractive, rather it appears to be the deterioration of the peripheral economies in Europe (Ireland in particular, but also Greece, Portugal, Spain, and Italy.)  This situation is not likely to reverse over the next few weeks.  Another boost to the dollar just occurred as North Korea attacked South Korea.  Typically as international tensions rise, investors seek the safe haven that the dollar provides, raising its relative value.  Consequently, it would be realistic to expect the U.S. market to maintain its strong showing through the remainder of the year.