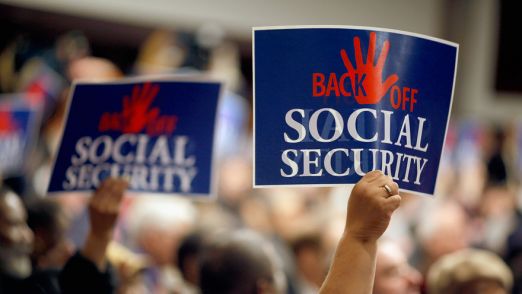 It was good while it lasted. But all good things — especially those which lawmakers regard as an unintended loophole — must come to an end.

Congress has agreed to, and the president is expected to sign into law, a bill that 1) averts a government shutdown and 2) shuts down two popular Social Security claiming tactics: the-file-and-suspend and the restricted-application Social Security strategies.

And now, millions of Americans who were planning to use these strategies to boost their household’s lifetime benefits must figure out what to do instead. Here’s what experts had to say:

Business as usual… for a little while

It’s business as usual during the phase-in period, said Elaine Floyd, a certified financial planner and director of retirement and life planning at Horsesmouth, a New York firm that provides financial education to advisers.

Between now and six months after the bill is enacted, file-and-suspend is still in effect, she said. Plus, it will still be possible to file for a spousal benefit based on a spouse’s suspended benefit. And, individuals who will be over 62 as of Dec. 31, 2015 can still plan on filing a restricted application for spousal benefits when they turn FRA over the next four years.

“But this change only affects people who will not yet have attained age 62 by the end of 2015,” he said. Specifically, he said, the new law would make it so that deemed filing applies beyond full retirement age rather than only applying before full retirement age.

This, in effect, kills off the “restricted application” strategy in which a person files for spousal-benefits-only at full retirement age while allowing their own retirement benefit to continue growing.

“But for people who will be 62 or older at the end of 2015, the restricted-application strategy is still available,” Piper said.

What else is changing?

The second big change deals with suspension of benefits, said Piper. Specifically, it says that, for people who suspend benefits more than 180 days after enactment of the bill, the following things will be true:

“In other words, the typical file-and-suspend strategy in which Spouse A files for retirement benefits and immediately suspends, to allow Spouse B to file for spousal benefits while Spouse A’s retirement benefit continues growing, is eliminated,” said Piper. “However, it’s only eliminated for people who have not yet suspended within 180 days of enactment of the bill.”

File and suspend benefit is still an option

The law allowing the voluntary suspension of benefits at FRA, however, hasn’t changed, according to Floyd. “It will now be used for its original intent: to enable a person who has filed for benefits and later goes back to work or otherwise changes his mind to suspend the benefit and accumulate 8% annual delayed credits to age 70, she said.

Deemed filing never did apply to survivor benefits, and it doesn’t now, said Floyd. “Widows and widowers can still file a restricted application for survivor benefits while their own benefit builds delayed credits,” she said.

Still, Joe Elsasser, a certified financial planner and founder of Social Security Timing in Omaha, strongly recommends that widows explore all claiming strategies available to them. “The rules just got more complex, since there are now two different sets — one for over 62 and one for under 62,” he said.

“The big losers, I think, in this will be divorcées — who may have a meager retirement available on their own record, and who could use a restricted spousal benefit to allow them to delay and pick up the additional credits to age 70,” said Jim Blankenship, a certified financial planner with Blankenship Financial Planning in New Berlin, Ill. and author of A Social Security Owner’s Manual.

“With the deeming expansion requiring all benefits available to be filed for regardless of age, these divorcées will be forced to take a lower benefit amount and cannot take advantage of the delay increase.”

Still worth waiting till age 70 to claim

Consider: In the case of early retirement, a benefit is reduced 5/9 of 1% for each month before normal retirement age or what is also called full retirement age (FRA), up to 36 months. And if the number of months exceeds 36, then the benefit is further reduced 5/12 of 1% a month, according to the Social Security Administration.

On the other hand, good things can come to those who wait, as Kurt Czarnowski, a principal with Czarnowski Consulting, is fond of saying. That’s because Social Security retirement benefits are increased by a certain percentage — depending on your date of birth — if you delay your retirement beyond full retirement age. (See table below)

So, a person born in 1943 would see their benefit increase 8% a year for every year they wait to claim after FRA, up to age 70. Example: A person born in 1960 or later whose benefit was $1,000 a month at FRA could receive $1,240 a month if they wait until age 70 to claim their Social Security benefit. By contrast, that same person would receive just $700 if they claimed Social Security at age 62. And that $540 a month difference, over the course of a lifetime, could be quite large.

“There will still be tens of thousands in difference between a smart claiming strategy or strategies and simply filing as soon as possible, at age 62,” said Elsasser.

Others agree. “Delaying benefits will be more important than ever,” said Floyd. “Now that couples cannot depend on the extra boost of spousal benefits, they must pay special attention to their own lifetime benefits and maximize them to the extent possible by filing at 70.”

And, in answer to the doomsayers who want to take Social Security early because ‘it may not be there,’ Floyd said, “the reforms enacted by this bill will help make Social Security more solvent, saving the system some $168 billion over 75 years.”

For those affected by the new law, Piper said “there are no clever strategies available for ‘free’ spousal benefits. And that means the when-to-claim decision(s) are much simpler. His advice:

To be fair, you shouldn’t decide to claim early, or at FRA, or after FRA in the absence of a plan. And with the change in Social Security laws, the need for such a plan becomes even more important. “People who are 62 to 70 will need to revisit their current plans for claiming and ensure they can be executed under the new rules,” said Elsasser.

Others, meanwhile, aren’t so sure. If most couple-claiming strategies go away, the strategy of delaying benefits becomes far less effective when no other benefits can be paid on a record that is suspended, said Blankenship.

Note: If you were born on Jan. 1, you should refer to the rate increase for the previous year.

Robert Powell is editor of Retirement Weekly, published by MarketWatch.