In his insightful book about the history of our understanding of risk, Against the Gods The Remarkable Story of Risk, Peter Bernstein discusses a seminal analysis of the variance of market returns.  Variance, in the language of statisticians, is simply the breadth of returns of the markets over time.  It makes intuitive sense that the longer period of time you look at, the larger the variance.  So for example if you look at the variance of daily market returns over a 10 year period, you are likely to get a larger number than if you only look at a 5 year period.  Statistically, variance will change in the exact same proportion as the time period if a market is efficient.  Thus if you look at the variance over a 10 year period, it will be twice as large as the variance over a 5 year period.

The following graph of the yield of a generic 10 year U.S. government bond is a great picture of that phenomenon: 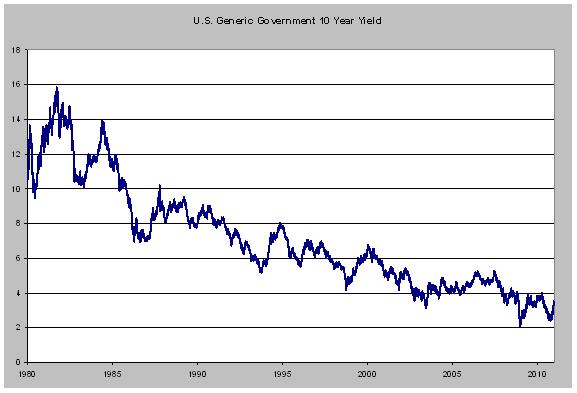 For almost 30 years (the peak in rates was in 1982) interest rates have been trending down.  But there is a limit. Interest rates will not go below zero – except as happened during an irrational period in 2008 when the yield on Treasury bills dipped below zero for a brief time.  Do we have to get to zero to end the trend?  Or has the trend ended and, if so, is the new trend going sideways or is it going up?

We believe that the trend has ended.  The yield on the 10 year Treasury bond hit a low of 2% in 2008 and bounced up to 4% in 2009.  Then in April of this year it looked like we were going to see the trend continue as the rate fell.  But on October 7th, the rally stopped and the rate began to climb again.

Our conclusion that the rally in rates has ended is not based on its failure to continue this year.  We don’t tend to put much countenance in the technical analysis of charts.  Rather, we feel that the economy has recovered to the point that deflation is no longer a significant concern and modest growth is sustainable.  Add to that the Federal Reserve has stated that they are concerned that inflation is too low and it would be hard to conclude that interest rates are likely to decline significantly.

Also the Fed seems to be somewhat less effective at getting the market to move the way it wants.  QE2 was announced in early November with the intention of coercing the market to lower longer term interest rates.  Yet the market responded with a Bronx cheer as it lifted the rate on the 10 year Treasury about 70 basis points between the time of the announcement and the end of the year.

So the question now becomes, what is the new trend that the market will follow, toward higher interest rates or will it just move sideways?  We believe that the movement will more likely be sideways.  It could be quite a while before the Fed begins to lift rates.  The stated purpose of low rates was to help the economic recovery.  With no pressure from rising inflation, the Fed has plenty of time to keep rates low in search of that goal.  Additionally we believe the Fed will be relatively unsuccessful in its goal as the economy will continue its sluggish growth and unemployment will remain stubbornly high.

While we remain firmly in the low inflation camp, it is interesting to note that unlike other times in out collective market memories, professional market prognosticators seem to be firmly divided into two polar opposite opinions on inflation.  There seems to be no middle ground as analysts seem to believe either that inflation will remain low, almost non-existent, or that it is about to come roaring back.

A couple of comments on the parts of the bond market before we sign off: corporate bonds are likely to outperform Treasuries in this environment.  With little change in interest rates, performance will be determined more by bond income than by changes in market price.  Thus corporate bonds, with higher interest payments, will provide a better return.  Please note, however, that in a low interest rate environment like we are in now, if interest rates do move significantly, the price change of a bond will make up a large portion of its total return.